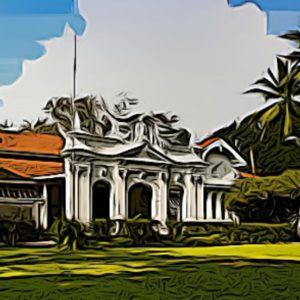 Movie Review: FOR A SON

The 2016 Sri Lankan/Italian movie FOR A SON (Per un figlio / Puthekuta), written and directed by Suranga Deshapriya Katugampala, tells the story of two Sri Lankan immigrants in Italy, a single mother and her teenage son. It was screened at the Goethe Institut Colombo on February 7th, 2018, as part of the monthly Film Forum, followed by a podium discussion with the director. 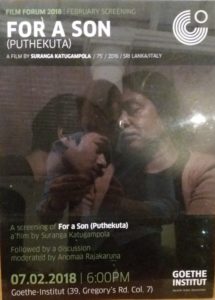 FOR A SON is based on Katugampala’s own experiences, who was born 1987 in Negombo and moved to Verona with his parents at age 8, and it marks his first feature-length endeavour after a series of short films presented at international festivals. It is a movie of quiet intensity that moves beat by beat through its starkly cut scenes, isolating its protagonists and floodlighting their personalities as well as their relationship, the movie’s inescapable centre of gravity.

Sunita (Kaushalya Fernando) is a Sri Lankan immigrant living in Italy as a caretaker for an old Italian woman (Nella Pozzerle) and struggling to provide a life for her unnamed teenage son (Julian Wijesekara). She is one of roughly 110.000 Sri Lankans currently residing in Italy, 25 % of them under the age of 18, most of them employed in social and public services. She works long and arduous hours, so her son can have his own room, afford to hang out with his Italian friends and integrate himself into local society.

As a first-generation immigrant, Sunita is still very much oriented toward her homeland and caught up in its traditions (as seen in a scene where she asks fellow Sri Lankans to perform a ceremony to ward away evil from her son), not able to speak the local language well and without local friends. As second generation, her son is caught between worlds and seems aimless, unsure, resentful: he misses warmth from his mother, he is not sure where he belongs, he has the urge to rebel without a clear goal and is also very much side-tracked by his budding sexual desires.

Neither mother nor son speak much and show few grand gestures, except for a brief fight as Sunita locks him out of the apartment for a night. We get to know them and their relationship through Channa Deshapriya’s focused camerawork that does not shy away from showing their vulnerability, their exhaustion, their irritation, anger, confusion, and desperation. FOR A SON has no soundtrack and follows its protagonists into their private spaces in hard cuts between (and sometimes within) scenes it does not attempt to hide. The camera is close to the protagonists, she is with them in the claustrophobic settings of Sunita’s apartment, the old lady’s apartment, the abandoned building the son hangs out at, and the empty roads in between.

The style is very realist, gritty, relentless, almost documentary, not elevating, overdrawing or embellishing, a minimalist portrait of two human beings done as much through physical bodies and environments as through dialogue and action. Rarely do we see other people (scenes are set at night, inside apartments or abandoned places), and when we do, they are almost mutes who do not seem to matter to the two main protagonists, even if they could be expected to. The Italian police and the men performing the traditional ritual just underline the quarrel between mother and son, while his friends and the old lady show the parallel world the Sri Lankans do not (yet?) belong to, a contrast to their own lives in precarious conditions.

There has been some debate around the sexual undertones of the mother-son relationship, expressed most clearly in the scene where the son huddles up against the sleeping mother and timidly fondles her body; but this is not a sexual relationship, it is a relationship of longing distorted through the teenage boy’s awakening sexual desires, which can be seen in the talk with his group of friends and their voyeuristic spying in the abandoned building. His encounter with a prostitute, whom he pays to sit on her lap and touch her breasts in the forest, is again a surrogate relationship, a substitute for the warmth and closeness he did and does not receive from his semi-estranged, permanently working mother.

In a telling conversation, the old Italian lady tells how she breastfed all her five children, to which Sunita answers that she did not breastfeed her son because she was always working; and during the visit of the Italian police, the policemen seem astonished to hear she is taking care of her son alone while working a full-time job. This illustrates the divide between her life and the ones of the Italians around her; and it also offers an explanation for her complicated and strained connection to her son.

The story of Sunita and her son cannot be generalised to stand in for the fates of all those who leave their homeland to life in Europe, but it offers an authentic and touching account of a mother-son relationship under difficult circumstances, the rift between first- and second-generation immigrants, and the struggle to bridge the divide between them. It is unsparing, but it does not rob its protagonists of their humanity or dignity: and it is a movie well worth watching.