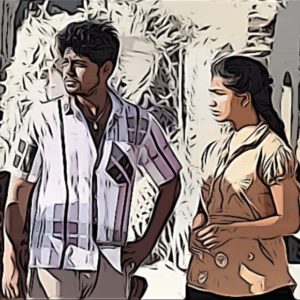 At their closest point, India and Sri Lanka are maybe thirty minutes of boat ride apart. Between them lies an inlet of the Bay of Bengal called Palk Bay: but it is more than just its shallow, reef-studded waters that divides the communities on both sides. No ferry crosses this strait, and Indian fishermen routinely clash with the Sri Lankan navy, leading to arrests or even deaths.

“Thirai Kadal” (The Chasm) is a 2017 Indian movie that attempts to shine a light on these issues. It has a runtime of two hours and was directed by Janaki Viswanathan after a screenplay by Srinivas Ganesh.

The movie follows Tamil fishermen from two communities, one in the Southern Indian state of Tamil Nadu and one in Northern Sri Lanka. As announced in the beginning, the main plot is modeled after Shakespeare’s “Romeo and Juliet,” which provides a solid arc to propel the story forward but also somewhat spoils the ending.

Events kick into motion when Sri Lankan fishermen capture a boat from Tamil Nadu at sea. As the governments of both nations have failed to dissolve the disputes over fishing grounds, the fishermen want to take matters into their own hands and negotiate a solution. However, Sri Lankan authorities arrive and imprison the Indian fishermen, leading to a tense standoff between politicians and media on both sides.

During the imprisonment, the main Indian character, a young poet working on his uncle’s trawler, falls in love with a Sri Lankan girl. After his release and despite her engagement, they meet again on Katchatheevu. Every year, this uninhabited island between Sri Lanka and India hosts a three-day festival around its only permanent structure, a Catholic shrine. The two young lovers get engaged in secret and go to Tamil Nadu, only for her to flee back to Sri Lanka under pressure from his family.

Gender roles play an important role throughout the movie. The Sri Lankan Juliet is locked into marrying a man she does not love, having abandoned all hope of happiness for herself. She did not get to choose her husband and is not allowed to say no as her stepfather hopes to gain political leverage and elevate his status through her marriage. The moment she shows agency and elopes with the Indian fisherman, everyone (except her grandfather) turns against her: her fiancée, her stepfather, and even Romeo’s family. Without a way forward, she kills herself on the return journey, followed by her lover’s suicide as he discovers her body.

“Thirai Kadal” shows three dimensions of conflict that span Palk Bay: between fishermen from both sides, between trawler owners and traditional fishermen, and between three generations. The oldest generation remembers a time when fishermen from both countries shared the fishing grounds, regularly crossed over, and intermarried. The middle generation is dominated by conflict: around the trawlers, with the government, during the civil war. And the youngest generation, the hotheaded Indian and Sri Lankan youths, are tempted to see each other as existential threats and competitors for the same fishing grounds.

The movie’s production is not perfect: while Pooja Gupte’s cinematography delivers beautiful vistas and intimate shots of life in two fishing communities, the actors tend to go overboard and lose credibility. In many moments, they do not seem like people genuinely experiencing an emotion but like people who are only trying to look like they are.

At least in the English subtitles (I do not speak Tamil), the dialog is on the nose, stating people’s feelings and explaining their reasoning and motivation. In this, however, the movie takes great care to convey the different perspectives and viewpoints of everyone involved. It is not black and white, and there are no heroes or villains. From the trawler owner struggling to repay his loans to the old man remembering the horrors of the civil war, from the priest torn between compassion and tradition to the traditional fisherman struggling to scrape by: everyone has their own story, and every story matters.

Despite the semiprofessional performances and low production value, there is a rawness and authenticity to this kind of production absent from many bigger-budgeted and more polished movies. The people in “Thirai Kadal” may not be great actors, but they are people that seem real, not in their roles, but as actual persons. They make the movie ring true in a way other movies do not, and they have something to tell.

The conflicts around Palk Bay are steeped in complicated history, and there are no easy solutions: but if the traditional fishing communities on both sides are to survive, they need to find a way forward and solve these issues. As the movie reminds its audience at the beginning and throughout, the fishermen on both sides are united by ethnicity. Whoever dies, it is Tamil blood that is spilled.

There is a Tamil proverb that goes “Thirai kadal odi thiraviam thedu,” which translates to “cross the seas and seek the treasures”. This is what the movie shows us: the fishermen have taken to the ocean for many generations, and they depend on fishing for their livelihoods. If either side loses access or clears out the wealth of marine resources, their way of life will no longer be viable, and it may cease to exist.