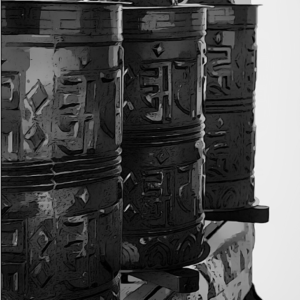 “The mountain path led them around a formation of jagged rocks, icicles hanging down in frozen candelabra. The monastery had gotten out of sight again, but it couldn’t be far now, not according to the villagers’ description.

They had told them that a stranger with two albino yaks had passed through, packsaddles laden with scrolls and prayer chains, his eyes the red of heart-meat, pointed solely at the monastery on the mountain’s higher slopes. The monks living there prayed for the villagers’ souls and hoarded their secrets: like all monks, they turned lives into texts, thoughts into mere symbols.”