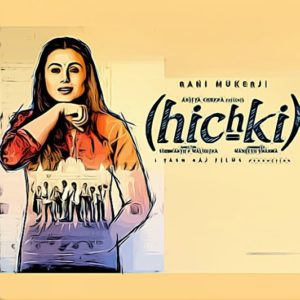 Starring acclaimed actress Rani Mukerji, “Hichki” (Hiccup) is a 2018 Bollywood drama directed by Siddharth P. Malhotra and inspired by the 2008 American movie “Front of the Class”, which was itself an adaptation of Brad Cohen’s eponymous book. “Hichki” tells the story of a woman struggling with Tourette syndrome as she follows her dream of being a teacher and inspires a class of underprivileged kids at an elite Mumbai school.

Tourette syndrome or Tourette’s is a common neuropsychiatric disorder that manifests itself from childhood on in a number of so-called “tics”. These tics are sudden, recurring movements or utterances, including the repetition of one’s own words or the words of others, the utterance of curse words or taboo expressions, rapid blinking, the constant clearing of one’s throat, or the movie’s titular “hiccups”. As a spectrum disorder, the severity and frequency of the tics varies considerably and can sometimes be controlled through behavioural therapy, sometimes through medication, and sometimes not at all.

In the case of Rani Mukerji’s character, Naina Mathur, Tourette’s manifests as short series of involuntary hiccup noises she tries to control by slapping her throat. As there is little awareness of the condition in India, childhood is difficult for her: She is seen as disruptive in school and made fun of by her classmates, people stare in public, and her own father isn’t capable of dealing with her. As an adult, she pursues a teaching career against all advice and is rejected by school after school. She keeps trying and finally hits a lucky break: St. Notker’s, the school which inspired her to become a teacher in the first place, offers a mid-term replacement position.

St. Notker’s is a prestigious institution that—in the world of the movie—had to incorporate students from a nearby slum after the municipal school closed down. No one in St. Notker’s thinks those students belong, and they are put into a special class. Mukerji’s character spends most of the movie’s runtime building up these kids by believing in them when no one else does, employing unconventional teaching methods, and not letting her Tourette syndrome discourage her. In a classic Bollywood ending, the underprivileged students top the school exams, everyone else admits their mistakes, and we are shown the end of Mukerji’s long teaching career when she retires decades later.

The movie follows the formula of many other feel-good school or sports dramas. The tale of the teacher leading her students to eventual success is neither new nor surprising, but excellent performances by both younger and older actors keep it entertaining. The film benefits from a tight focus on the teacher-student relationship: there is no romantic subplot, no outside threat to the school, not even a lot of shots of the city of Mumbai. “Hichki” is set in St. Notker’s and occasionally the homes of its students, and it is their story and the story of their teacher, who happens to suffer from Tourette syndrome.

The movie revolves around the rags-to-riches story and makes Mukerji’s portrayal of her character’s condition seem incidental after a third of the runtime. This is seen as a mistake by some reviewers, but it could be argued that it is actually a strength: A person’s life doesn’t need to be dominated by a neuropsychiatric condition, and in most cases, Tourette syndrome allows for a “normal” life. It might be a defining personality aspect, but it is only one among many, which in the case of the movie’s main character include her devotion to teaching, her persistence, and her love for her students.

As Tourette’s is a widespread condition around the world and millions of people have to deal with its symptoms, it is great to see a major movie cast a spotlight on it. “Hichki” handles the subject matter with care and respect, and the success story of a woman with Tourette syndrome, told in the sentimental, escapist, brighter-than-life trappings of a Bollywood genre movie, provides a positive role model and can help audiences to understand and accept the difficulties and differences of those affected.