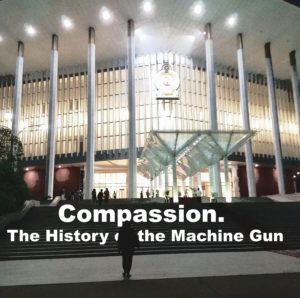 Theatre Review: COMPASSION. THE HISTORY OF THE MACHINE GUN

Swiss director Milo Rau is highly acclaimed and somewhat controversial, his work documentary as well as political. From drowning refugees in the Mediterranean to the Rwandan genocide in 1994, “Compassion. The History of the Machine Gun” once again touches on the topics he has explored in “The Congo Tribunal” or “The Civil Wars”.  The double monologue had its world premiere 2015/2016 in Rennes and Berlin and has since travelled around the world; as the opening of a tour across South Asia, it played at the BMICH in Colombo on March 8th, in a performance organized by the Goethe Institut.

The scenery is minimal, although perhaps not minimal enough, a mound of waste–a former home, a life–composed from local debris in a reference to Sri Lanka’s own history of civil war. Two actresses come on stage to tell their respective stories in monologue, reinforced by the projection of their faces on a larger background screen. Everything about their speeches is carefully constructed to generate authenticity, even though the audience is fully aware of its nature as a stage play and the third wall is porous to non-existing. The production process of the play is highlighted, the research in the refugee camps of Greece and Turkey discussed and put into contrast with the (numerically unimaginably more horrifying) genocides and civil wars of Central Africa.

Of the two actresses, only Consolate Sipérius is actually telling her own story: born in Burundi, survivor of genocide, adopted by Belgian parents, today an actress cast here by virtue of these facts. She recounts her life into the camera, matter-of-fact and without exaggerated emotion.

She is, however, quickly drowned out for the majority of the play by Ursina Lardi, who plays both herself and a Swiss teacher recounting how she went to Central Africa with a help organization and experienced violence in Rwanda and then-Zaire first-hand. Her character has autobiographical elements but is mostly a collage of other people’s experiences, the result of the interviews and research Milo Rau and his team conducted. She is elegant, tall, articulate; she whitesplains a history of a Central Africa she never really accepted as an independent world, only as a relation to Europe. Lardi stands in for the aid workers and NGOs that flock to the world’s conflict areas: young and privileged, compassionate and ignorant, borderline racist.

She comes to Central Africa for reasons not entirely clear, and she never has any personal stake in the game, never stands to lose a fraction of what her local partners are putting on the line. She is a tourist, a visitor, more or less untouchable as a white westerner, and she is well aware of this. It’s not that she has selfish motives, that she came just for experiences and stories to tell, just to feel special: but she doesn’t know what she is doing, and the impact of her actions remain murky. She saves a man’s life, but he later joins the army and forces her to urinate on her doomed friend in a dream; she cares for a giant camp of refugees, but they are slaughtered by first the Tutsi and later the Hutu army, with only the perpetrators of earlier atrocities escaping unscathed.

Milo Rau and his play ask the question of whom her actions actually benefit, if the refugees are her burden or her capital or both, if the whole industry of development aid and NGO activism is a scam, and how far it is complicit in the atrocities it aims to mitigate.

Of course, none of this is new, none of it surprising. Millions of people have died in Central African conflicts, numerous plays, films, novels and articles been made about it, and still little has changed. The audience recognizes the caricature that Lardi’s character is, the monstrosity that hides inside her story of compassion and witness-bearing: but still it laughs at a joke that really isn’t funny, at a knife aimed at its own throat. “Compassion” is and always will remain a play about other people in far-off places, whether it is being staged in Germany or in Sri Lanka, and the audience will always return to the comfort and safety of its homes after the curtain falls.

Lardi’s character brings up Lars von Trier’s “Dogville” and misunderstands the movie’s climax. In “Dogville”, Grace is being asked by her father what he should do with the villagers who enslaved and raped her: but the question is not whether he should kill them or not, it’s whether they should be held to the same standard that Grace holds herself, and treated accordingly. The aid worker’s tale shows a distance that cannot be bridged between her and the people she is trying to help, a second-order exploitation that goes deep and has many dimensions. The suffering in question is not the aid worker’s suffering, with her nightmares and Strauss and Beethoven, and it is not the suffering of those viewing photos of a drowned child. It might be impossible for the privileged behind Europe’s walls to genuinely engage with the narratives of the perceived other: at the same time, it is unthinkable to ignore them.

Milo Rau tries to create awareness and give a voice to witnesses and victims, through theatre and projects with direct impact on the ground, most famously the “Congo Tribunal”: and perhaps most importantly, he highlights the mechanisms of creating authenticity on stage, of false and real compassion, Western humanism, sensationalism and appropriation.