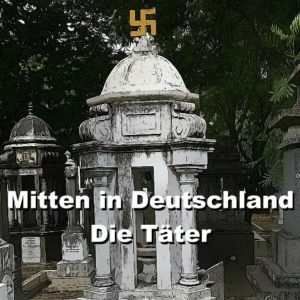 The Goethe Institut Colombo screened the first of these movies on February 16th, 2018. “Die Täter: Heute ist nicht alle Tage”, directed by Christian Schwochow, tells the story of Beate Zschäpe, Uwe Mundlos, and Uwe Böhnhardt, the three principal perpetrators. It leads its audience through the familiar beats – a wasted youth in the underderveloped hinterland of (freshly reunified) Eastern Germany, violent clashes between left and right, no jobs, no drive, no perspective –, and it does it well: but there is a nagging feeling that something isn’t working out quite right, that the movie might miss its aim.

Zschäpe, Mundlos, and Böhnhardt are played by professional actors, and they are good-looking, fit, eloquent and charismatic: even against their behaviour and the foreshadows of worse things to come (the movie doesn’t actually show any of the murders or bombings and basically ends with them going on the run), they are humanized and made sympathetic. As they are the movie’s protagonists, the audience identifies with their struggles, which are relatable enough at first; then, it follows them into the abyss as they embrace right wing ideology and radicalize themselves more and more. The effect of identification was surely intended, but does it work out? It makes the NSU members larger than life, it makes them more beautiful than life, and even when the police begins to hunt them, the audience sees from their perspective as the self-declared underdogs and revolutionaries.

Another weak point could be the fact the movie came out during the ongoing trial and before all events could be firmly established: as it admits itself, it is in part fiction and has added some connections, some scenes and dialogues that might never have happened. The desire for being up-to-date is great, and especially the media sector has little patience and a short memory: but watching it now with two years and almost 8.000 km distance, it seems like waiting might have been a better move.

Still, it is an expertly made movie worth watching, and as it is only part one of a three-part series, a final assessment should be made after the stories of the victims and the investigators have been added to this ambitious project.